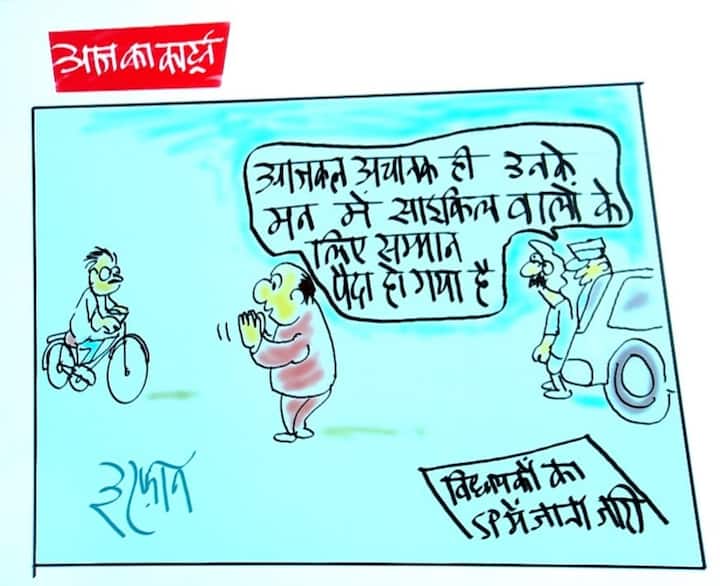 Irfan Ka Cartoon: The dates for the assembly elections in five states including Uttar Pradesh have been announced. On March 10, it will be known who will become the Chief Minister in UP, Punjab, Uttarakhand, Goa and Manipur. But before the UP elections, BJP MLAs continue to go to the Samajwadi Party. Famous cartoonist Irfan has made a cartoon on BJP MLAs going to SP. See you too.

What has Irrfan shown in the cartoon?

Irfan has shown in the cartoon that two people are standing near the car saying, “Nowadays suddenly they have developed respect for cyclists.” In the cartoon, a man is standing in front of the bicycle with folded hands. ”

Let us tell you that just before the UP assembly elections, there is a flurry of resignations in the BJP. So far 14 MLAs including three BJP ministers have resigned. The rebel MLAs say that this process will continue for a few more days.

UP election results will come on March 10

Let us inform that the voting for 403 assembly seats of Uttar Pradesh in seven phases will start from February 10. Voting will be held in UP in seven phases on 10, 14, 20, 23, 27 and March 3 and 7. While the counting of votes will take place on March 10. The Election Commission has not allowed any political rallies and road shows till January 15 for the assembly elections in UP, Punjab, Goa, Manipur and Uttarakhand in view of Corona.

Magh Mela: Arbitrariness in the name of faith, flouting of corona protocol in Prayagraj Magh Mela, 72 positive so far

Coronavirus Cases Today: In the last 24 hours, more than 2 lakh 68 thousand cases of corona were registered in the country, omicron Cases cross 6 thousand

SC order will come today on investigation of lapse in PM Modi’s security, committee was formed under the leadership of retired judge

What big things did Harak Singh Rawat say in his ‘manifesto’, who was expelled from BJP, know everything

The family taking the procession from the plane, the women sang the wedding songs during the journey