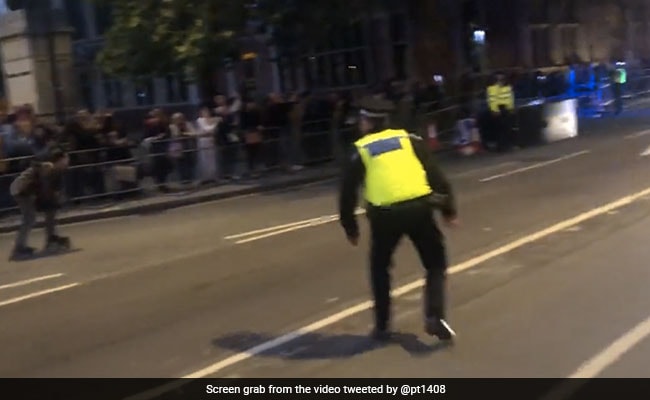 Around eight police officers floored the roller-skater near Parliament Square.

A man in the United Kingdom sparked panic after he almost collided with King Charles’ car while roller skating.

According to The Independentthe incident took place on Friday evening when King Charles made his way to Westminster Hall to perform a vigil at Queen Elizabeth’s coffin. A video shared on Twitter showed a man on roller-skates speeding towards the royal cavalcade near Parliament Square in London before being floored by around 8 police officers.

Rollerblader evaded security and seemingly tried to collide into #KingCharles motorcade travelling to the vigil, shortly after 1930 on parliament square. Police intervened just in time. #QueenElizabeth#queueforthequeue@BBCNews@itvnews@SkyNews@Channel4Newspic.twitter.com/P0rw2qqlRz

The Metropolitan Police informed that the man was handcuffed at the scene before officers established that he had no malicious intent and let him go. A spokesperson for the department said, “At approximately 7.40pm, as police vehicles were entering Parliament Square, a pedestrian attempted to cross the road.”

“An officer on foot quickly intervened, bringing the man to the ground in order to stop him from continuing. The man was subsequently spoken to by officers before being let on his way,” the spokesperson added, as per The Independent.

This came minutes before King Charles and his siblings – Prince Andrew, Princess Anne and Prince Edward – stood silently guarding their mother’s coffin in Westminster Hall in a ceremonial event known as the Vigil of the Princess.

Meanwhile, in a separate incident, the UK police also arrested a man on Friday “following a disturbance” in Westminster Hall, where the Queen is lying in state. A video emerged online of the moment the man was detained after attempting to rush toward the late monarch’s coffin.

He darted out of the line and allegedly ran up to the stairs of the catafalque before touching the coffin. In a statement, the cops said that the man was “arrested for an offence under the Public Order Act and is currently under custody”.

At least 30 dead from Ian, one of strongest, costliest US storms

Pushback against Afghan refugees continues as Iran deports over 7,000 migrants in past week