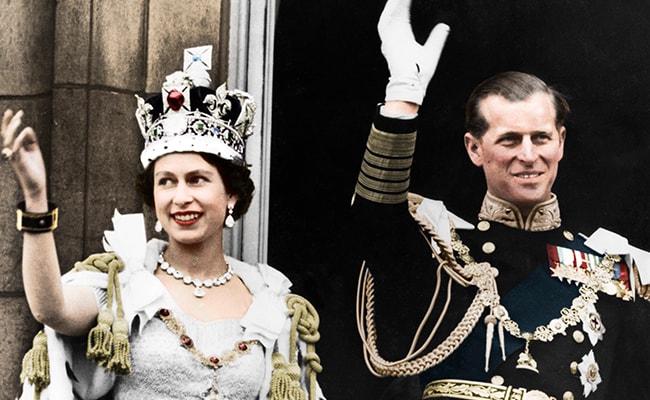 Queen Elizabeth and Prince Philip were married for 73 years. (File)

Queen Elizabeth II will be buried with her late husband Prince Philip at the conclusion of a solemn state funeral service made up of an hour-long ceremony at Westminster Abbey in London on Monday, Buckingham Palace announced on Thursday.

Britain’s longest-reigning monarch’s state funeral will begin at 11am local time on Monday and conclude with a national two-minute silence, with the order of the service set to reflect the Queen’s personal touches.

The doors to Westminster Abbey will open at 8am local time on the day of the funeral, to allow around 2,000 guests made up of nearly 500 world leaders, including Indian President Droupadi Murmu, to take their seats. Under the plans in place for the day, all heads of state and overseas government representatives, including foreign royal families, will gather at a central venue and travel under “collective arrangements” to the Abbey.

“Almost 200 people who were recognised in the Queen’s Birthday Honours earlier this year will also join the congregation, including those who made extraordinary contributions to the response to the COVID-19 pandemic, and have volunteered in their local communities,” Buckingham Palace said.

From the Abbey, the Queen’s coffin will be conveyed to Windsor Castle for a service at St. George’s Chapel, where a private burial service attended by King Charles III and other senior members of the royal family will see the coffin laid to rest with that of Prince Philip, who died last April, at the King George VI Memorial Chapel on Monday evening.

“The events of recent days are a reminder of the strength of our constitution, a system of government which in so many ways is the envy of the world,” said Earl Marshal, the Duke of Norfolk, who holds the hereditary role with the responsibility for the delivery of state occasions such as the state funeral.

“The respect, admiration and affection in which the Queen was held make our task both humbling and daunting – an honour and a great responsibility. It is our aim and belief that the state funeral and events of the next few days will unite people across the globe and resonate with people of all faiths, whilst fulfilling Her Majesty and her family’s wishes to pay a fitting tribute to an extraordinary reign,” he said.

The Queen’s coffin is Lying-in-State at Westminster Hall, with thousands of members of the public queuing for hours to pay their respects. Buckingham Palace has said that the Queen’s four children – King Charles III, the Princess Royal Anne, the Duke of York Andrew and the Earl of Wessex Edward will mount a 15-minute vigil around the Queen’s coffin at 7.30pm local time on Friday.

The Lying-in-State is set to close to visitors at 6.30am local time on Monday, when preparations for the state funeral will commence. The coffin will be carried in procession to the state gun carriage of the Royal Navy. King Charles and his sons, Princes William and Harry, will follow the coffin as it is carried into the Abbey for the service, to be conducted by the Dean of Westminster and British Prime Minister Liz Truss and Commonwealth Secretary General Baroness Patricia Scotland among those doing readings.

At the end of the service, the coffin will be followed out by the King, the Queen Consort and members of the royal family.

The senior royals will again walk in procession from the Abbey to Wellington Arch in central London, with the Big Ben tolling throughout this procession. At Wellington Arch, the coffin will be moved into a state hearse and taken to Windsor in Berkshire around 40-km by road.

Once in Windsor, another procession will take the coffin inside St. George’s Chapel on the Windsor Castle estate for a service attended by around 800 members of the Queen’s Household and estate staff.

Following a committal service at 4pm local time, the coffin will be lowered into the Royal Vault as the Dean of Windsor reads a psalm. The Queen’s piper will play a lament and the Archbishop of Canterbury will give a blessing and the national anthem marking the end of the public aspect of the funeral.

The final burial service will be completely private for the royal family, to take place at 7.30pm local time and conducted by the Dean of Windsor. The earth to be scattered onto the Queen’s coffin will have been gathered from the royal mausoleum at Frogmore on the monarch’s Windsor estate.