Vicky Kaushal and Tripti Dimri are currently in Croatia along with Farah Khan to shoot a romantic song for their upcoming film.

While they have been treating their fans with some lovely pictures from the exotic location, a few clicks from the song shoot have leaked from the set and have gone viral on social media.

Check out the photos here:

In one of the pictures, Vicky is seen lifting Tripti in his arms while in another they are seen sharing a romantic moment by the sea. Vicky looks cool and casual in his all-white outfit. Tripti, on the other hand, looked glamorous in a yellow strapless outfit.

Vicky will reportedly be seen in a new look as a lover boy in the film. Anand Tiwari’s directorial also features Punjabi singer-turned-actor, Ammy Virk, in a key role. The film is looking to hit the screens next year.

Farah, Vicky and Tripti are having the time of their life. The trio is enjoying their trip to Croatia to the fullest and their pictures on social media are proof!

Check out some of their photos here: 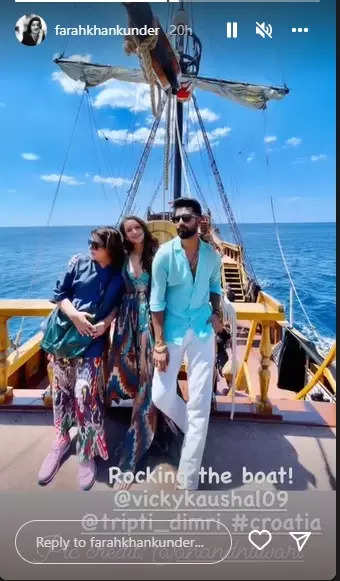 Meanwhile, on the work front, Vicky has a line-up of some very interesting projects which includes his untitled next with Laxman Utekar of ‘Mimi’ fame. The movie also stars Sara Ali Khan opposite him. The actor will also be sharing the screen space with Kiara Advani and Bhumi Pednekar in ‘Govinda Naam Mera’.